Welcome to The Bright Eyes Podcast: Advice for Healthy Vision for All Ages. Your hosts are Dr. Nate Bonilla-Warford & Dr. Beth Knighton, residency-trained optometrist that provide eye exams for glasses and contacts, and specialty services including vision therapy, myopia control, orthokeratology, and sports vision training. Their mission to empower patients by providing the best in friendly, professional, and individualized eye care.

In this episode, Dr. Nate talks with Dr. Jeff Goodhew of Abbey Eye Care about color vision deficiency (AKA colorblindness) and EnChroma glasses.

You can listen in the player below or read the transcript. The show is available via Stitcher, Google Play, iTunes, and the webplayer below. You can find all previous episodes here. If you have any questions or suggestions for future episodes, please email office@BrightEyesTampa.com.

Intro:                                     00:11                    Welcome to The Bright Eyes Podcast: Advice for Healthy Vision for All Ages.  Your hosts are Dr. Nate Bonilla-Warford & Dr. Beth Knighton, two doctors who really see eye to eye. They can help you get perspective of the latest visual scientific evidence for improving your vision and helping you keep your eye on the ball. We have real facts and aqueous humor, without making spectacles of ourselves.  And don’t worry, the jokes don't get any cornea than this, we promise! 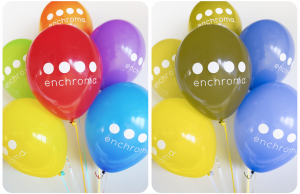 Dr. Jeff:                                01:15                     Ontario is a province, Florida is a state, so they're just similar, similar entities. Ontario is probably 15 million people and we were the first retailers and the demand for this product is, has been huge. I think a lot of color vision or color blind people out there have known about this product and of course it's sold from the US.  So here in Canada, people were a little bit leery about ordering something online. What if it didn't work? So there was this huge pent-up demand, uh, in our area and once we flip the switch and went live, we had always people phoning and emailing and stopping by. It's been, it's been crazy. It's been good. It's been awesome.

Dr. Nate:                              01:52                     Yeah, EnChrome is one of those things that I had been following for quite awhile and I had talked to other doctors and I had heard great things and I really am thankful that you took the time to talk to us about color vision and what EnChroma is. And I think this will be a great conversation. So Jeff, let's just start off with the basics. When we say somebody is colorblind or we say they have a color vision deficiency, we don't necessarily mean that they see the world in black and white, but they may see color differently than other people.  When you see somebody in the exam room who has problems with color vision, how do you explain that to them?

Dr. Nate:                              03:08                     Yeah, I agree. And I think that that's a great approach. I also think it's actually more accurate even though the term colorblind is what people usually use a shorthand. I think your color confusion term is a great way to approach it. I have two practices. One that's for all ages and the other one is exclusively for kids and so often I'm the first person to do an eye exam for these younger patients and I'm definitely the first person to detect color vision problems. And so it comes down to educating them about school and occupational options and other factors. I'm not exactly sure when you graduated from school, but you went to Waterloo, one of the two optometry schools in Canada, if I'm correct?

Dr. Jeff:                                04:13                     No, exactly. The, you know, the X-Chrome lens was a was a contact lens that you could wear in one eye, it was deep, deep red, so cosmetically looked a little strange, but all it did was allow certain people to pass some of the standardized color vision test so maybe they could get into the police force or become an electrician or a commercial pilot. So they would wear this lens just for that color vision test and then never wear it again. This is the first product that's out there that can actually enhance a person's, you know, quality of life. What I've observed about EnChroma is unlike the X-Chrome Lens, you can't get patients to take them off. Yes, even though they're tinted, they become their full-time glasses. Agree completely.

Dr. Nate:                              05:20                     Well good. Yeah, but it's something that really helps them see the subtle differences between the bright leaves and the more orangy ones and the green. And he was really excited about being able to see the different colors and he actually took those fit over years with them and we had an event where we're going to, as a staff, go to the Tampa Bay lightening game and I saw him later that day and he wore them the whole game and now he's got his own prescription pair and he wears them all the time. I never seen him without them. You know, he really likes him, but I think we're getting a little bit ahead of ourselves. We've mentioned EnChroma several times, and these are glasses that people can where they can get them in their lenses, their prescription glasses in different frames, but why don't you talk just briefly about what they are and what they do.

Dr. Jeff:                                06:09                     We need to back up a little bit and go back to your first question about what is colorblindness? I think for the lay person, we've got three color receptors I guess at the back of the eye in your retina, sort of a blue sensor, that green sensor in a red sensor, and normally with folks who have have colorblindness, the lights, the colors of the red and green receptors can pick up they overlap so they don't get that differentiation between the reds and the greens because those two sensors aren't doing their jobs the way they should. And with EnChroma Lens, it's got a special filters that that knock out very specific wavelengths are very specific colors of light and what that does is it separates what the green and red receptors can now detect, so it makes them more kind of a normal, what a normal color vision person would would would see. So yeah these lenses, they're tinted so they look like normal sunglasses, but they're much higher tech than that. They're blocking very, very specific colors that allow those color sensors at the back of the eye to do the job that they're normally supposed to do.

Dr. Nate:                              07:21                     Yeah It's really elegant because I think that if you just look at the lenses themselves, they look like sunglasses, but it's so precise and so specific when they're filtering out that muddy, confusing overlap that you're talking about, you know, you need some pretty sophisticated equipment to see the specific frequencies that they're filtering out. You wouldn't necessarily know what they're doing if you just look at them. You know, it's interesting because our brains are fascinating things and you know, in my experience when I go outside with patients and we're talking with them and they're looking around and everything, it almost never works instantaneously. It does take them a few moments to sort of compare and contrast and sort of realize what's going on. And then they get kind of quiet, they get that sort of smile and their mouth kind of drops a little bit and then they'll say like, oh, I thought this was that color, or now I realized it's a totally different color. I see this whole pattern of things going on.

Dr. Jeff:                                09:56                     Yes, exactly. So it's kind of a big outing for, for these folks when they come, when they come to our practice and this gentlemen put the glasses on and for 25, 30 years, the number of years he'd been married to his wife, he thought her eyes were blue and they actually weren't blue, they were Hazel, so they had, you know, Brown with a better green and he just couldn't see the green. So the first time ever he could see the true color of his, of his wife eyes and that was emotional for, you know, everybody in the whole office. So he, he ordered a pair of prescription EnChroma because he needs prescription, so that takes a couple of weeks to come in. So this was on a Saturday. Um, try the glass on, Love them Monday morning he drives all the way back to our practice, another 90 minutes, so three hours both ways just to try the Fittovers, just to try the samples again. He knew his glasses wouldn't come in for another couple of weeks. He just wanted that experience again. And then two weeks later his glasses came in and we called him and it's like he was sitting by the phone, 90 minutes later he was there like, this guy is so excited and like the other, you know, the spouse of your staff member. This patient hasn't taken them off, they've become as regular eyeglasses.

Dr. Jeff:                                12:45                     So it's really fun to read what they talk about. It could be, you know, how overwhelmed they were. They saw how vivid red cars on the road look like on the drive home. They stop at the grocery store and they could, they did not have to ask somebody OK, can you tell me when she was the red pepper and the green pepper? Because to them they always look the same. Bananas don't look all, you know, rotten anymore that you can, you can see the yellow. No peanut butter looks brown not green. So it's really neat to see them document their first couple of days, uh, after having the EnChroma eyewear and then just to see the, how happy their friends and family are for them.  Like they'll get, you know, 40, 50 likes, I'll have all these comments like I'm so happy for you. And everyone's really emotional, like they're so happy that this person, um, get some of the, the color world back I guess. Um, so that's been, that's been super, super cool is just to, just to kind of sit back and just read the stories that people are posting and how it's affected their lives because every, you know, it's one in 12 males of color vision problems. So we all, everyone knows somebody who has a color vision problem. So there's lots of folks out there who can benefit from this, so I think, you know, helping spread the word about this exciting technology is, uh, is great. 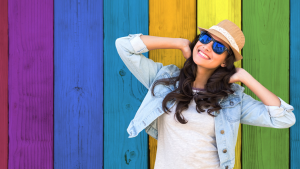 Dr. Nate:                              14:42                     So Jeff, I really want to thank you for your time and sharing your experience and your expertise and that's been really wonderful and thanks to all of our patients and listeners we'll post some information about EnChroma on the website in the show notes so you can follow that online. There's information, there's an online color vision test that you can take. There's different things you can do. As always, if you have any questions, comments, or suggestions about our podcast, you can email us at office@brighteyestampa.com. Until next time, this is Dr Nate. Thanks for listening.