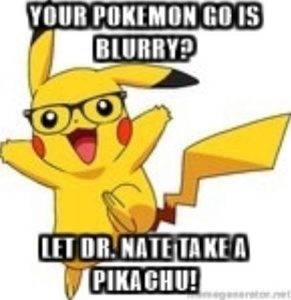 If you are under 30 or have kids, chances are good that you’ve heard of Pokemon, a card game/cultural phenomenon featuring “pocket monsters”, combining card collecting, game play, and battling. Pokemon is celebrating its 20th year and has spawned books, TV shows, movies, video games, and more.

The new app called Pokemon Go is one of the hottest phone-based games in a long time. It’s an augmented-reality game where you catch and battle pretend Pokemon in the real world. And it’s fun.

I am too old to have played Pokemon as a kid, but my kids play. I am interested in real-world electronic gaming and used to be very involved in Foursquare. 4 years ago I did play Ingress, a phone-based global game of Capture the Flag built by Niantic (then a Google company). Niantic is the company behind Pokemon Go. So when a librarian mentioned to my daughter (checking out a Pokemon book), that the public library was a Pokespot, I decided to download the game and play it with my kids.

If you play Pokemon Go, there are lots of helpful guides to get you started. Here is one my wife found on Forbes. I encourage you to read them, because there is no game play guide. What follows are the recommendations from a pediatric optometrist to parents with kids about how to make Pokemon Go the best it can be for your family.

This is a rare chance to play on a digital device as a family! Take advantage of it.

Spending time outdoors is important for children’s visual development. Pokemon Go is one of those few apps that encourage this. In fact, users are posting complaints about how much exercise they are getting by using it! Don’t forget sunglasses and sunscreen.

Get out of your car and play! Let’s face it. Driving around just to catch Pokemon without getting outside and exploring is just lazy. And defeats the goal of getting exercise and playing in the real world. Lots of parks and areas with public art have Pokestops and Pokemon Gyms. Get out of the car, catch some Pokemon, but enjoy real world, too.

Walking around distracted, eyes affixed to your phone, is risky. Streets, curbs, bicycles, lampposts, and other people could be ignored. People have been injured playing Pokemon Go. Play in a group, so that someone is paying attention to the surroundings. In our house, the group must include both kids and one grown-up. Grown-ups can keep the group from going where it shouldn’t. Plus, it is more fun with other people! 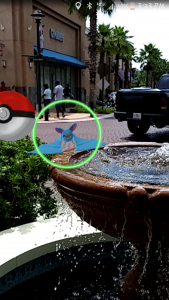 One cool thing is that players tend to congregate at Pokemon Gyms and Pokestops. You can see them looking at their phones and hear them talking to each other in Pokemon language. These players can provide helpful suggestions, but make sure your children understand to use common sense with strangers. Again, having a parent in the group is helpful here.

Maybe this is common sense for younger kids, but I have read stories about teens walking around in the early hours of the morning, going to unfamiliar areas to catch a Meowth or an Oddish. Combine this with attention being paid to the screen and, well, you get the idea. There have already been people arrested for using Pokemon Go to lure people to a secluded area and robbing them.

Even with the battery-saving setting, if you take long walks, your battery will not hold up if you are playing Pokemon Go the whole time. Just saying.

Update: A good reminder from my Neighborhood Homeowners Association: Many PokeStops are fountains and fountains are often in ponds. Know what else are in ponds in Florida? Alligators. So don't get too close to ponds without looking around. Especially at night. The local police have a few other recommendations here.

One more thing. I know for a fact that there are Pokespots and Pokemon near the Bright Eyes Family Vision Care office. (Unfortunately, none near Bright Eyes Kids.) So don’t forget to Catch ‘Em All when you come to your appointment. :)