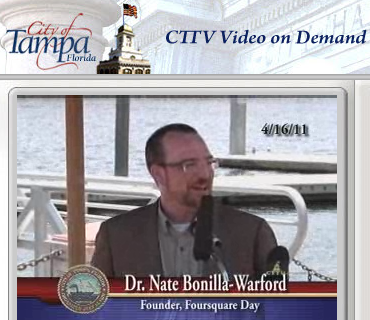 I can certainly say that it is has been a remarkable journey. If you are not familiar, Foursquare Day started a little over a year ago when I was trying to find a way to have a fun event for Bright Eyes using foursquare and, to my surprise, the idea was very popular. In three weeks, it went global. You can read about happened in 2010 here and the recent story in the Tampa Tribune here.

This year, thanks to volunteers in Tampa and around the world, it was an event greater success. Foursquare Day was officially proclaimed by 19 mayors around the world, including Michael Bloomberg of New York City, and Tampa's newly elected Bob Buckhorn. Over 1000 parties were held all over the world and money was raised for many great causes such as the Humane Society, Red Cross, food banks, and Japanese disaster relief.

April 16th was a busy one for me. After a few hours of sleep in Houston, TX, where I had spoken the day before to eye docs about Facebook, I flew back to Tampa early. I rushed for an interview for Bay News 9, did some blogging for 4sqday.com and then participated in a press conference with Mayor Buckhorn. It was very cool to spend time with the mayor talking about social media in a relaxed setting, outside by the Sail Pavilion. Then Mayor Buckhorn and I spoke at the podium about the importance of social media and business development, before Mayor Buckhorn proclaimed Jason Cyr the "Foursquare Mayor of Tampa."