When I was in middle school, I built a calculator with the help of my grandfather. There was no kit, but I had to figure out how to wire about 20 integrated circuits together. Although it could only add the numbers 1, 2 and 3, I thought it was very cool.

Well, the students are way beyond calculators! This month's Patient Spotlight is about Jon and how he and his team design robots for competition. It is astoundingly cool!  It makes me wonder what my kids will be doing in 15 years? The Biotech Team? Nano Club? - Dr. Nate

Jon: The robotics competitions are very hectic but lots of fun. They start out a little slow but they eventually get more exciting as the day progresses. It is kind of like watching Inception but without any dreaming.

Jon's mom: These competitions involve rules and challenges set annually on a national level on "fields" that are designed differently each year and all the students involved have to follow a strict set of rules and figure out how to finish the challenge course within a 2 minute 40 second period of time and get the most points. They are also expected to exhibit "gracious professionalism" throughout the event. The first part of the challenge is autonomous, in other words the kids have to program the bots to complete the first 40 seconds of the match to perform "hands free". Final 2 minutes of each match has 2 "drivers" for each bot, using a game control type device to maneuver the course.

How has your team done this year? 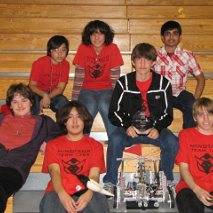 Jon: My team has done extremely well this year. We have won two competitions so far (only one is required for state. Plus we hosted a competition at our school and we staffed it which also qualifies us for state). We have made some alterations to our robot but for the most part we kept it the same.

Jon: I got interested in robots when I was going into 6th grade. That summer to be precise. I took a robotics camp that was one week long at East Lake High School. There we built robots using Tetrix pieces (a type of robot building kit) and the guts of a remote controlled car. That's only part of it because in 7th grade I took a robotics class and built a robot using Lego Mindstorms NXT pieces.

What kind of career do you envision for yourself? Does it involve robotics directly?

Jon: I want to become either a mechanical or biological engineer so that I can study robotics even more and develop a new type of prosthetic arm that can move the exact same way that a normal human arm does. This is my dream job that I plan on getting.

Jon: If any one wants to they can go to the competition on January 8th, 2011 at 7701 22nd Avenue North, St. Petersburg, FL. This will let them get a taste of what a robotics competition is like. If they want to talk to my team we will be team Minotaur and we will be wearing hats with bull horns, red or black capes, and red shirts with our name and logo on them.

Jon's mom: Teams arrive at 7 a.m. and the competition finally gets underway at 9 a.m. and winds up at about 4 p.m. At that point, there is a final based on the top 4 teams, who can choose any other team (not necessarily the top scorers are chosen!) to compete in the final alliance. The kids are really like athletes. The teams have conferences with the judges prior to each event where they describe their designs and philosophy about robotics. They explain to judges how they developed the robots, what has worked and what hasn't and how they figure it out.  They send team members as scouts to watch both the practice and competition fields to determine the strengths and weakness' of the other teams. All teams are paired up with every other team in an alliance against other team pairs throughout the event, so they can see who they work best with. It's fascinating!